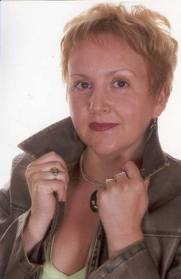 Jurgita Zujūtė was born in Kybartai but now lives in Vilinus, Lithuania. Her books of poetry include Night Songs, I Pissed on the Statue of Frank Zappa, and Nocturnes and Aubades. She is in private practice as a psychiatrist. Other works include an academic study of stress among university lecturers, an account of the Rwandan genocide and a travel book about Greenland. Read now her account of the end of the EUOIA as a movement. But don forget to access the anthology Twitters for a Lark here, to which this piece appears as an introduction.

Lost in Transit
​
The European Union of Imaginary Authors (EUOIA) was invented and presided over by the fictional bilingual Belgian poet René Van Valckenborch for his final project before his disappearance in 2010. Van Valckenborch, who made no attempt to conceal his constructedness, supposedly asked one poet from each of the EU states to write him a poem, in response to a quotation from Henri Lefebvre about space, which was then scheduled to be translated into Flemish (or occasionally French) via robot translators, and the resultant poem ‘finalised’ by Van Valckenborch before intended presentation on his EUOIA website.
Only five such ‘translations’ by these poets – who are themselves fictional – appear at the end of Van Valckenborch’s collection A Translated Man (Shearsman: 2013), authored by Robert Sheppard, and they are represented in Twitters for a Lark by recent work. Sheppard, who from 2010-16 was President of the EUOIA, undertook to ‘translate’ the work of the remaining 23 EU poets as a collaborative enterprise, making use of the full list of poets drawn up, but not used, in the writing of A Translated Man. (Croatia joined in the intervening years, pushing the total number to 28.) Sheppard says, ‘I would like to thank all of my collaborators, who have pooled their sovereignty, as it were, and constructed poems and people in so many different, educative and exhilarating ways.’ The range of collaborators is impressively wide, and this, in part, accounts for the uniqueness of each poetic voice.
Any anthology of pan-European work, even one limited by the borders of the EU, is going to be broad in its scope, and we hope this collection will both delight and demonstrate that. (The exception is Frisland, which nevertheless aspires to membership, despite its dubious geographical status.) Humour can be found juxtaposed with horror, the political with the personal, the formalist with the liberated, in the arrangement dictated by Van Valckenborch’s list. It is not my intention to draw attention to any particular works (such intervention would be invidious) but simply compare the effusive Oulipean procedures of Paul Coppens’ versions of Van Valckenborch’s quennets with the glum, misanthropic single sonnet of Hubert Zuba, or contrast the deft word choreographies of Cristòfol Subira’s bilingual lyricism with Minna Käkkäinen’s extensive and scientific Martian landscape poetry. Sophie Poppmeier’s performative burlesque pieces seem as far as one can get from the conceptual austerity of Trine Kragelund’s textual gatherings. Of course, such eclectic range is to be welcomed (there is no contemporary poetic paradigm, let alone an ever-closely unified Europoem), but it must be asked what commonality the collection displays, what is held in common. Obviously the spirit of the enigma that is (or was) Van Valckenborch hangs over the whole enterprise, and the conducting and co-creative presence of Robert Sheppard (himself one of the fictional poets by the time the project concluded) is constantly guiding progress with his poetics of what he rather mysteriously calls ‘multiform unfinish’. There is no need to take his jargon seriously, but neither may he be wished away from the work.
Many of the poems invoke ‘history’ as either muse or medusa, tool or rule, and it is an irony of history that brings these birdsong-like twitters to a final cadenza. In 2016, as the project reached its conclusion, the British EU Referendum in favour of what an ugly neologism called ‘Brexit’ – a ‘Eurologism’ might be a better term for it – led to a mirror exclusion in the ranks of the EUOIA: Sheppard was expelled in a ‘Shexit’ coup (as it was aptly named by collaborator Scott Thurston), and replaced by the controversial poet Hermes.
At the March 2017 EUOIA Conference in Vilinus, which I chaired, Hermes’ fatal combination of narcissistic personality disorder, make-believe and financial corruption, led to the withdrawal of counterfeit EU funding and the sudden collapse, de-branding and disbanding of the organisation. Its famous five multi-coloured vowels were unscrewed from above the podium and, in my final discretionary act as chair, donated to the Rimbaud Museum in Charleville. They were lost in transit.